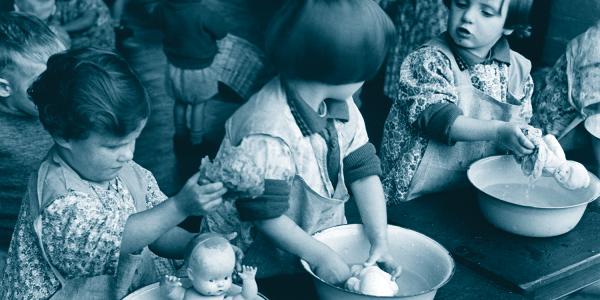 In his short essay The philosophy of toys, Charles Baudelaire wrote one of the first attempts to understand children’s relationships with dolls. Published in 1853, he asks: what exactly do children do with their toys and what do they get out of it? He writes: “All children talk to their toys; toys become actors in the great drama of life. Yet he is intrigued by the compulsion to both decorate dolls and destroy them.

In the end, he found no answer – but have we done better in the past 160 years or so? The short answer is yes. Sarah Gerson, a researcher at Cardiff University, thinks we now have good evidence to suggest that playing with dolls has very positive effects on childhood development and learning.

Gerson has spent over 10 years studying the relationship between children and play, and in particular how imaginative play with dolls helps children develop an understanding of the world around them. Doll play, she explains, is a key facet of learning sociability: in a series of experiments conducted in October last year, her team demonstrated that the part of the brain that manages the “Social processing… thinking about other people’s thoughts, understanding emotions, things like empathy” was just as active playing with dolls as it was playing with other children.

“When children play alone with dolls,” Gerson explains, “they can recreate [their] social worlds, so they practice these social interactions that they do when they actually interact with another person, and it feels unique ”compared to other types of play.

Brain scans suggest that the dolls are crucial for the socio-emotional learning that is so essential during the early years of school and into adulthood. This is supported by evidence from different types of studies. For example, this can also be observed in research on children’s ‘internal state language’, or ISL. This is where children begin to recognize their emotions, intentions and compulsions, and to articulate these states for themselves and for others. Gerson says that dolls can play a vital role in the development of this language.

“You can imagine if [the child] is playing with two dolls and they say something about one doll angry at the other, or one is jealous that the other doll has a toy or something, that’s all that happens in them heads – or imaginary heads – of these dolls, and that’s what we think kids are practicing, ”she explains.

But is this role of dolls in childhood development still recognized in schools and early childhood settings to the extent that it should be? Salim Hashmi works at King’s College London and recently completed his doctorate on the relationship between children, toys of different kinds and the neurosciences of social development.

He suggests that “play in general, in any of its different ways of being, has long been considered important for many aspects of children’s development. The dolls, in particular, have been seen as very beneficial because they look like humans ”.

However, he believes there is a hierarchy of play in people’s minds that downplays the importance of playing with dolls. He is keen to advocate for dolls to feature prominently in play time, providing children with valuable insight into relationships and emotions, as well as more constructive learning based on Stem (science, technology, engineering and math. ), such as Lego, puzzles or problem solving. These other types of gambling are gaining in importance, he argues, as they are more explicitly linked to academic purposes in the minds of adults.

What this can lead to, Gerson says, is an attempt by adults to structure doll play to make up for what they think is missing. This, she says, is the wrong approach.

It’s also important, she stresses, that everyone working with children recognizes that dolls are equally beneficial for boys and girls. Research has shown that although most children will not be able to express a strong sense of their gender identity until they are 3 to 5 years old, many will experience a gender perspective in their social experience from their children. guardians. This often includes girls directed to dolls and boys to Lego and cars.

Hashmi points out that denying boys the opportunity to play with dolls, or not actively presenting them with opportunities, could have a long-term impact on their development of ISL and, as such, on their levels of performance. empathy, emotional regulation and social dialogue.

That’s not to say that young boys “won’t develop these skills in another way,” Hashmi says, but it may limit the opportunities they have to do so.

And a final consideration, when it comes to dolls, is an audit of the diversity of your current school dolls, in terms of type and appearance.

Because the dolls look like humans, the emphasis should be on the variety of physical representation: height, age, ability, race, gender, etc. Children can only play with the toys given to them, so if caregivers only provide white female dolls, it can influence how much a boy or colored child wants to play with them or how they play with them. them.

Additionally, a recent study in Israel, which Gerson plans to investigate further in his next research, suggests that the physical appearance of dolls may elicit preferential treatment from children who share that appearance, while still presenting a doll. a different social group. Can encourage positive attitudes towards people in this group.

Another goal of variety should be the media through which the dolls are accessed. While some adults may view devices and screens as a distraction from ‘right’ playing or learning, Hashmi’s key message is to help children play with the dolls they love, including via screens, as children explore imaginative play in many ways, be with a Barbie, a toy with a drawn face or a video game avatar.

“Kids can play in different ways, they can play in a ‘room’, take on roles, be dolls, they could just handle it completely… kids who tell stories can make a hybrid of it all,” he explains. .

Additionally, recent work by Hashmi suggests that this benefit can be seen regardless of whether the doll is a physical doll or a character on a screen. Having recently completed a PhD exploring play with video games versus Playmobil, Hashmi pointed out that virtual worlds in video games can serve purposes very similar to the imaginary worlds of dolls that children create.

Ultimately, whatever form they take, Gerson wants dolls to be taken more seriously in the education system. She hopes that further study of children and dolls will yield more interesting results to make an even more convincing case.

“People have studied pretend play, fantasy play, construction play, but doll play has not really been studied in depth, so it’s a very rich area to look at what children are doing. do and what they might learn from it. “

Molly Bolding is a freelance journalist

This article originally appeared in the September 17, 2021 issue under the title “Your focus on … Playing with dolls”