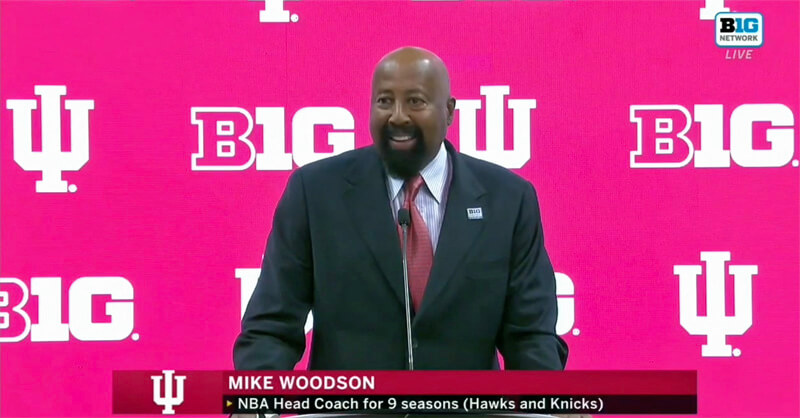 Mike Woodson was on the podium this morning at Big Ten Media Day in Indianapolis. Woodson discussed the Indiana cast around Trayce Jackson-Davis, the growth of Rob Phinisee, Xavier Johnson, and more.

MIKE WOODSON: Thank you. Hello. How are you? Thank you, Commissioner Warren, and your staff for all you’ve done today. It’s a nice setup. I would like to send a cry to our new president. Also a new president, Quinn Buckner, who is the chairman of our board of directors, as well as Scott Dolson who made the trip to New York to bring me home. So it’s good to be back.

We have a number of new guys in our baseball club. It gave them the opportunity to bond with some of the old guys who were here last year.

I will therefore give the floor to all questions.

Q. Coming from the NBA, coaching and playing, pretty tough markets, do you think that gives you one more way to get these guys into the NIL mindset, of running a business, when they’re pushing for the next level in the NBA, so don’t they see that as a distraction as they try to play a good college season?

MIKE WOODSON: I think it helps a bit. But, again, I’m in the Big Ten now. There is a group of elite coaches who have done it. I am new to this area. So I don’t know if it gives me an advantage or not.

I have spent my whole life in the NBA. A lot of the players you recruit are trying to level up. Now with the NIL and the portal things have changed now, I think, in college basketball.

I think we as a university have to be on top of how we lead our players through this. But there is a lot of work to be done. Again, I don’t know if I have an advantage or not. I know I compete with a lot of great college coaches and a lot of great players who play college basketball.

Q. With Trayce Jackson-Davis obviously being one of the best Big Ten players this year, what role do you see some of your other guys playing, especially some talented freshmen you had last year?

MIKE WOODSON: Once again, when I took this team and started watching a lot of tapes, films about the team, we have some gaps to fill. I thought we were out, like bringing Xavier Johnson, Miller, bringing Tamar Bates, big Mike, I thought we filled some of those holes.

I’m looking at our list if everyone needs to step up. It’s just not the four guys that we brought in, the guys that I inherited. Everyone has to play a role. I have always felt that as a coach. We just can’t rely on Trayce to carry the load.

I try to instill in all of these players that they have a chance to play and make a difference in our baseball club. This is the only way, I think, that we can win at a high level.

Q. We talked a lot over the summer about your quick indoctrination to find out more about all of your players. Can you tell us a little bit about how you know your assistant coaches and the like, how it has all worked for you so far?

MIKE WOODSON: When I took the job, it was on the fly. I had to put in a staff, I thought the guys we brought knew the college game. They are good basketball coaches. They helped me navigate the recruiting process, the dos and don’ts.

Then just the college game in general from a basketball point of view. It’s a little different from the pros. In the pros we have a lot of guys who can do all three balls. Our team, you know, we’re trying to get there. That’s why we went to find Xavier and Miller who can both do the long ball. Hoping that Tamar Bates, Galloway and the guys I inherit get better this year in terms of filming.

But I’m happy with my staff because, again, without them I would be lost, being new to this area. But we have a lot of work to do, a long way to go.

Q. How did you see Rob Phinisee evolve? How does it do things differently than when you started?

MIKE WOODSON: Again, I’m trying to assess the players based on their relationship with me now. I can’t look back and look at the things Rob did and didn’t do.

For me it was a treat. I think he’s been one of the brightest points over the past three months in leading our ball club and getting things done on both sides of the pitch.

My problem with Rob is that I just have to get him to shoot more. I tell him it’s good to shoot basketball. I don’t know if he’s been told by coaches in the past, but I’m telling him it’s okay to do that.

It has been a treat for our team in terms of growth. I’m going to need him, his leadership, as we move forward this season.

Q. Xavier Johnson has played a lot of college basketball, but not on successful teams. Is there something you have to go through to get into the habit of winning with a player like this who is obviously talented but hasn’t been successful?

MIKE WOODSON: Again, we have to do it with all of our players. We are all new. They’re trying to get to know Coach Woodson and I’m trying to understand them as individual players and what they can do to help us from a team perspective.

Xavier has been great because he changes the game with his speed. He can hit. He can enter into painting and create. I’m just trying to make him become a better point guard and involve his teammates in managing our offense. There is no doubt that he has to be good defensively because I think that’s where we will be a better team if our team is defending at a high level. This will put us in a position to win ball games.