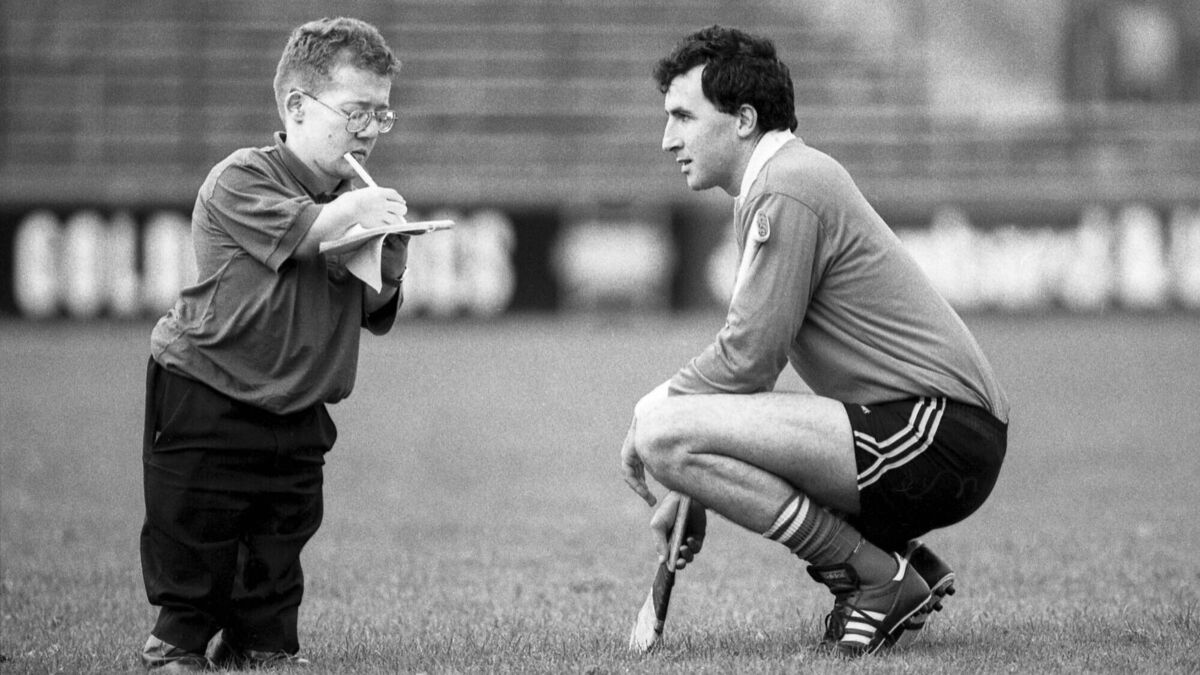 Enda McEvoy: The crumbs of the table

Here are some takeaways from the All-Ireland press event from Cork to Páirc Uí Rinn last week.

It rained, forcing investigators and interviewees to gather under the main gallery in order to conduct their business.

Ger Millerick, meeting the national media for the first time, appeared as an endearing young man who was gracious enough not to look too weary when asked (probably for only the millionth time) the spelling of his name. “So, are you related to Linda?” “Etc.

Micheál Martin, it appeared, had come earlier to convey his apostolic blessing and playfully remember that Cork won many All Irelands under a previous Taoiseach in the city.

And the locals couldn’t have been more helpful, including Joe Blake, the PRO County Council, and Derek Connolly, the ground key keeper. Thanks to Derek, in fact, my resume now includes entries like “McNamee Award Winner.” Managed to get the correct final score in most of his match reports. Once used the referees locker room facilities at Páirc Uí Rinn.

I measured my life in media gigs across Ireland, of which last Saturday was the last stop in a three-decade journey. Obviously I ate steak at Langton’s, but anyone can eat steak at Langton’s. Less predictably, I also ate steak in Athenry Market and under the old main stall of Páirc Uí Chaoimh.

Each of these press nights brings back a souvenir, usually based on food. How suitably Proustian.

In Wexford, I nibbled cubes of cheddar cheese on cocktail sticks. In Tipperary, I gorged myself on pastry, so good it could have come from Paris, at the Horse and Jockey hotel. (A few Italian hovering tourists also had the common sense to get stuck.)

In Galway, I devoured chicken wings shipped from the local Supermac in downtown Loughrea.

Along the way, almost after the fact, I collected quotes that I hammered into stories. Maybe someone has read them.

The increasingly loud ticking of the clock suggests that politely queuing for quotes from – and more and more – people half your age probably isn’t a job for an adult. . Again, this makes us aware of our place in the scheme of things, which never hurts. Are the players flattered to be asked for their opinion or are they internally laughing at us as we run around for our own sake? I have no idea. It might be better this way.

Come to think of it, would the GAA world come to a halt if there were no media events across Ireland and therefore much more limited coverage of Sunday’s centerpiece? Most likely not, but to complain that the quotes that emerged were innocuous misses the point.

Of course, they were harmless. John Kiely is unlikely to offer his exegesis of Cork’s exit strategy. Kieran Kingston isn’t about to spell out where his guys need to improve their game in the Munster semi-final. And no player or manager will offer a fortune hostage in the form of a sinister sound clip. They speak at length, saying very little. Of course they do.

On this point Ger Ryan, the Tipperary PRO at the time, made an interesting observation a few years ago. Why, he wondered, did GAA editors seem obsessed with getting player interviews when the profiles of the same players were often infinitely more illuminating – you know, insightful anecdotes from colleagues and colleagues. old managers instead of carefully curated quotes from the horse’s mouth? Fair question.

That the beast must be fed is indisputable. Either the GAA wants big game advertising or it doesn’t. Press gigs, whatever their imperfections, are the easiest way to get it.

There is no one size fits all media night across Ireland.

In 1996, Liam Griffin, who had us eaten out of his hand all summer anyway, was so eager to help that he organized a light workout in Wexford Park, after which the hackers were allowed to enter the field to interview any players took their fancy. (“Ah hello George, nice to meet you. Tell me, how many Leinster and National League finals have you lost until a few weeks ago …?”).

For a few years in the early 2000s, Kilkenny’s press night was a joke, with a nadir being reached on the night players finished eating and disappearing through a door while the media waited at the dining hall entrance. Around 2007, Glanbia’s Kieran O’Connor took matters into his own hands. Everything has changed dramatically and for the better.

After that, four or five players were out each year, placed at separate tables, and the cannon fired to bring the squad down. One player was sealed off exclusively for the Sunday papers, an innovation for which I claim full responsibility. (Out of sheer interest, I hardly need to add, since I have just been employed by the Sunday stand.) Far from being reluctant, like their Roundhead image, Brian Cody’s players were chatting happily, most even seeming to appreciate the attention. It’s no surprise that so many of them have returned as experts in retirement.

The success of Kilkenny thankfully put an end to the idea, so common at the time that it became accepted wisdom, that a player who was quoted in the papers ahead of time would inevitably have a stench on D-Day. On this point, however, Exhibit A remains a Tipp man.

In 2010, Lar Corbett was cast in a room at the Horse and Jockey Hotel with the guys from the Sunday Newspaper. Being Lar, he set to work like many ducks in the water. At the end of the 45 minutes allotted, Seamus O’Doherty, brilliant master of ceremonies in the Árd Comhairle section of the new grandstand at Semple Stadium, stuck his head, saw how it was going and – great guy! – gave us another 15 minutes.

Lar was so traumatized by his grilling that he scored three goals in the final.

Ah yes, the restoration. Listen, we’re not complicated people. We are not foodies. Our instincts may not be low, but they are definitely basic. The animals need to be fed and the tenderloin steak is always a winner. If you ever think Kilkenny generally receives positive coverage, the annual All Ireland Media Dinner at Langton’s is the reason.

The genre, alas, is dying. Twenty years ago, a large proportion of participants stayed where the function took place. Late drinks and the exchange of GAA gossip tended to follow. Those days are gone (damn it, the accompanying signature photo is even 2008), killed by highways, technology, and parsimonious accountants. They will never come back. Pity.

Besides, I do not have access to tickets for Sunday, before you request it. I am a journalist.