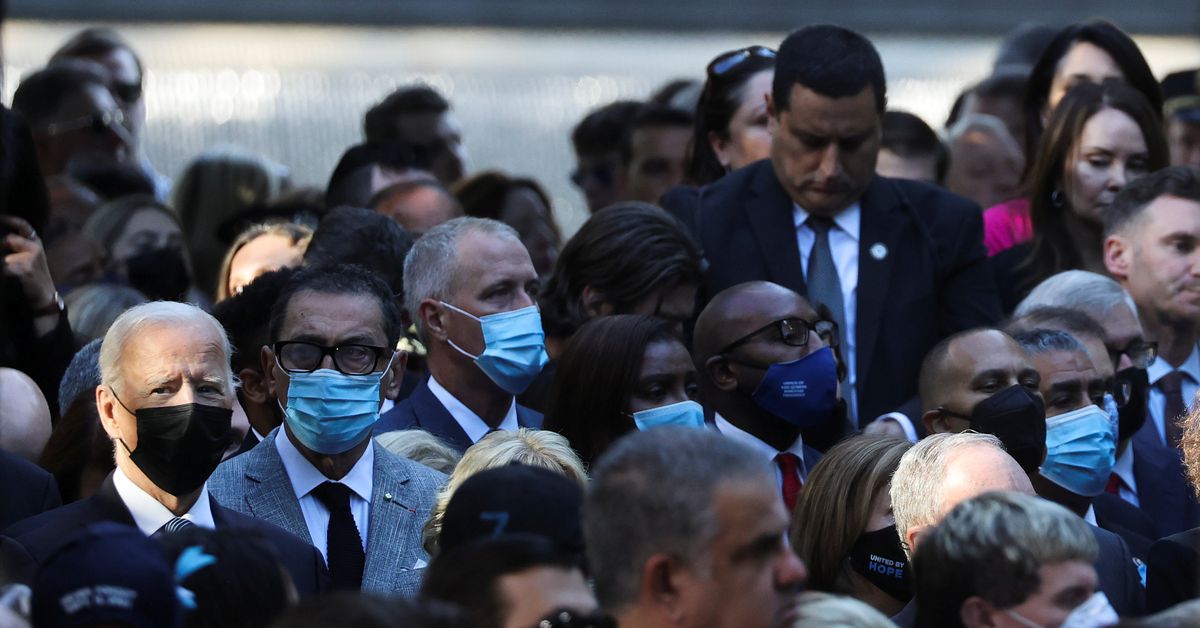 SHANKSVILLE, Pa., September 11 (Reuters) – President Joe Biden commemorated the 20th anniversary of the September 11 attacks on the United States on Saturday by visiting each of the sites where hijacked planes crashed in 2001, in honor of the assault victims.

Biden started the day in New York City, where he and First Lady Jill Biden attended a ceremony at the site where the World Trade Center Twin Towers once stood before planes hit the buildings and brought them down . They then flew to Shanksville, Pennsylvania, and were to return to the Washington area and visit the Pentagon.

The Bidens, along with former Presidents Bill Clinton and Barack Obama and former First Ladies Hillary Clinton and Michelle Obama, shared a moment of silence with the crowd at 8:46 a.m. to mark the time the first plane struck.

Nearly 3,000 people died in the New York, Pentagon and Pennsylvania bombings, where passengers on United Flight 93 defeated the hijackers and the plane crashed into a field, preventing another target to be hit.

In New York City, on a beautiful, clear day similar to the weather of 20 years ago, relatives read a list of those who died in the towers.

Biden, head down, didn’t comment. Rudy Giuliani, the mayor of New York at the time of the attacks, attended the ceremony. Former President Donald Trump, from New York, did not.

In Shanksville, the Bidens participated in a wreath-laying ceremony at the National Flight 93 Memorial where the names of those who died are engraved on a marble wall.

Also in Shanksville, in rare public comments, former President George W. Bush, who was ruling the country at the time of the attacks, warned of the threat of domestic terrorism. Recalling the unity of the American people in the days following September 11, he called for a return to that spirit amid growing political division in the country. Read more

Later that day, Biden was scheduled to visit the Pentagon, the symbol of American military might which was pierced by another of the planes that were used as missiles that day.

The anniversary comes shortly after the end of the US-led war in Afghanistan that Bush launched some 20 years ago to root out al-Qaeda, which carried out the 9/11 attacks.

Biden’s withdrawal from U.S. troops in August, months after a deadline set by his Republican predecessor Trump, and the resulting rapid fall of the country to the Taliban drew criticism from members of both political parties. Read more

Biden wasn’t supposed to comment on any of the sites. He released a video on Friday to express his condolences to the relatives of the victims and to underline the national unity that resulted, at least initially, after September 11.

“It’s so difficult. Whether it’s the first year or the 20th, the kids grew up without parents and the parents suffered without kids,” Biden said.

The president noted the heroism observed in the days following the attacks.

“We also saw something too rare: a real sense of national unity,” Biden said. Read more

Biden, a Democrat, pledged to build such a unity after taking office in late January, but the country remains deeply divided politically.

US Presidents often visit one of the three sites on the anniversary of 9/11, but it is unusual to visit all three on the same day.

“The president felt it was important to visit each of these three sites to commemorate the lives lost, the sacrifices made on a day that touched millions of people across the country, but certainly many in these communities,” White House spokeswoman Jen Psaki said. Friday.

Last month, many families of 9/11 victims asked Biden to skip the 20-year commemorative events unless he declassified documents they say will show Saudi leaders supported the attacks. Last week, the president ordered the Justice Department to review documents from the FBI’s investigation into the attacks for declassification and publication.

Football, volleyball, soccer and golf results from the region

Tyler, The Creator Redefines Style and Roots Its Roots